Hello my lovely crafty pals. It's time for a new challenge at Sweet Stampin' and since we're racing through this year so fast, we've decided to get ahead on some Christmas crafting. Have you been making Christmas cards throughout the year? Or do you leave yours until just before Christmas? I'm known to be still making them Christmas Eve! So I take every other opportunity I can to get ahead with my Christmas crafting. I've rather fallen in love with Unity Stamps this year. I discovered this stamp company late last year and let's just say, I now have a lot more red rubber than I ever previously did! I used a really fun and cute Christmas image called Cool Little Christmas from Unity Stamps for this creation and the sentiment that comes with that set. 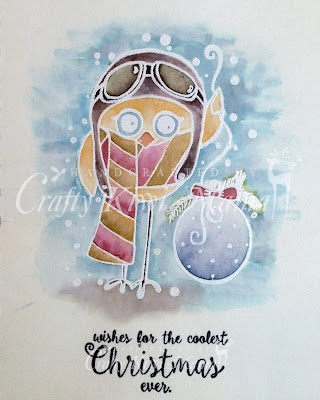 I've seen crafty pals using this 'white border' technique for some time in their creations and always thought it looks utterly stunning, so with this simple image, I thought I'd give it a go. The watercolour paper I used was actually a really cheap one from my local $2 store, as I was just having a play and paper is so expensive in New Zealand, I didn't want to waste 'good paper' on an experiment. But I ended up being so pleased with it, I took it right through to completion. I don't know that I'd get the same patchy cool finish on better paper that I did with this, but I really liked the effect! My brother saw it and commissioned this card for a friend of his. 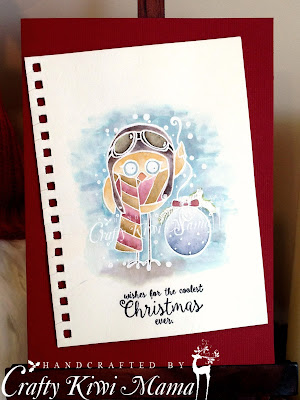 I liked the way the colouring came together so much, I didn't want to do anything to detract from it. So the page with its notebook edge, was torn straight out of the watercolour paper pad and added to a 'Christmas Red' notecard, no embellies, totally CAS and I utterly love it! So did my brother which was fab, because he usually really loves the more embellished creations I make. It's so lovely, he often asks me to create cards for friends and he's very artistic, so I count it a real compliment. 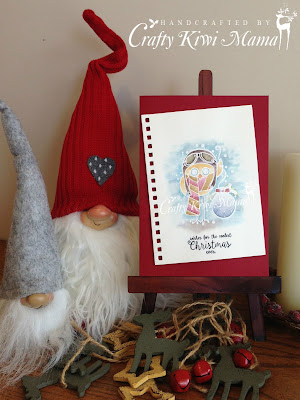 I have a thing for the Scandinavian Christmas gnomes, known as Tomtenisse. They are Santa's helpers, but not in the way we know elves to be. They are based on deeper Scandinavian folklore, they are the keepers of the farms, of the animals and nature. I have such a love for them and started my collection when I visited my Swedish bestie, so took the opportunity to use them as my Christmas props. I've been hunting down Tomtenisse stamps ever since I discovered them, and may have a couple of makes to share closer to Christmas. So watch for those if you like them too! 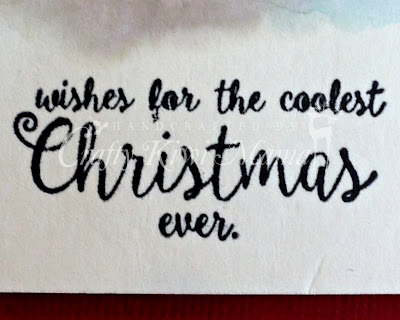 I love that the Unity Stamps sets, often come with their own sentiments, and I happen to think this was a rather fun and 'hip' Christmas sentiment for this fun card. Stamped just in Memento Black Ink rather than white, as I wanted to keep the watercolour just around the image itself.

P.S. If you like this 'white lines' technique, go check out the amazing Elise, whose creations I've been swooning over for years! You can find them here at Paper Love Affair. Thank you Elise, for your constant source of inspiration xoxo

Update: So excited to see I made the Top 3 at Deep Ocean Challenge! Thank you so much ladies. I'm so thrilled!! :)

Second Update: I just saw that I made Top 3 at Colour Crazy Challenge too. Whoop Whoop. Doing a little happy dance, so glad you liked my Christmas card. Thank you so much! 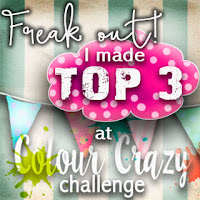 Christine L said…
Wow Wends... you're right.... your card needed nothing else at all as it's so perfect as it is.. LOVING the white line technique you've used, and the blue background you created is perfect and just right for that image!! I was also interested to read about the Scandinavian gnomes... I have quite a collection too - but didn't know their history.

I'm afraid my Christmas cards generally have to wait until November, unless I'm making DT cards with Christmas images!

Cara said…
This card is beyond fabulous, loving how you've watercoloured it, it looks stunning. I think I need you to do a step by step! I have a gnome obsession too! I buy a new one every year, but Mum stopped me from buying the three foot high one I saw... Maybe next year... x
15 July 2017 at 23:55

Chris said…
Love this Wends! The way you've coloured the image looks amazing, thought it was pre-coloured when I first saw it! It's a beautiful design too...simple and very striking!
Chris
x
16 July 2017 at 00:15

coops said…
So cute Wendy.i really love the fabulous image and your cas design really shows him off :D
16 July 2017 at 05:37

kiwimeskreations said…
Wends this is amazing - well done on the cheap watercolour paper that gave such wonderful effects. The image with its muted colours and the torn edge on the paper is perfect against the deep red.
Blessings
Maxine
16 July 2017 at 20:38

Thank you for sharing your creative talent at the Challenge at Creative Moments, good luck!
Looking forward to see you at the next challenge

Wendy Nicola Jackson said…
Dorothy, this white line technique I've used is with Versamark Ink and White Embossing Powder before doing the watercolouring. So it's a resist technique. xoxo
19 July 2017 at 09:51

Kath said…
A fabulous card and such a sweet image. Thank you for sharing with us at Christmas Cards All Year Round.
Kath x
21 July 2017 at 05:05

creationsnz said…
LOVE this card! super image and paint effect. I will have to find out more about that, never heard of it before. CarolG
27 July 2017 at 08:37

Helen said…
Great card - thanks for sharing it with us at Christmas Cards All Year Round and we hope to see you again next month.

Elise said…
Hi Wendy! I looove your card! It's GORGEOUS dear! This image is sooooo DARLING and love how you've coloured it! Awwwww .. thank you so much for saying such kind things on your post .. so sweet of you! Hope you're doing well and enjoying your days!

CraftyNatalie said…
Great creation. Thanks for joining us at creative inspirations this month.
16 August 2017 at 20:34 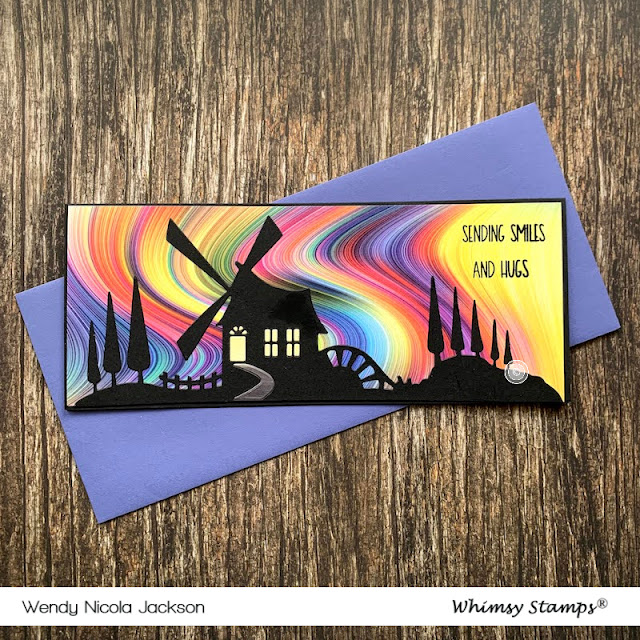 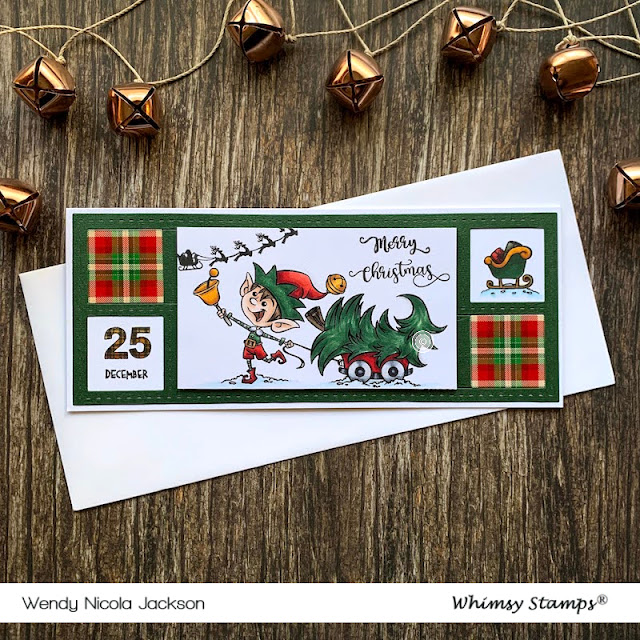 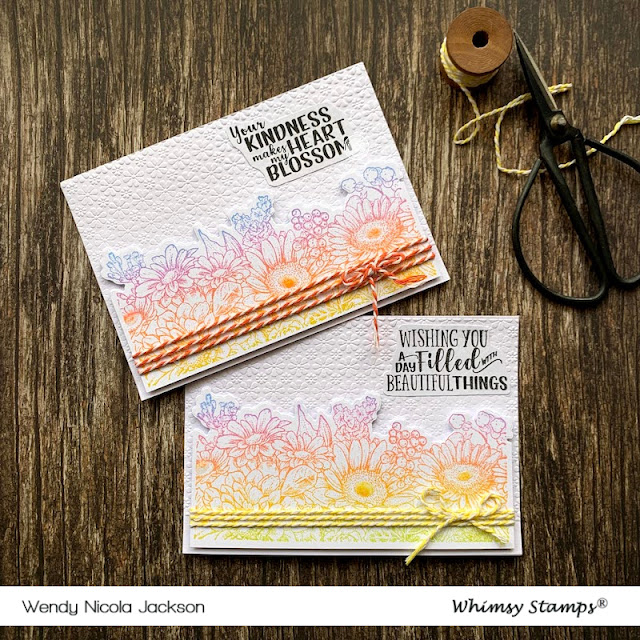